Lucky I am to have been able, this morning, using the trusty microscope, to capture the secretion of ectoplasm (trial or demo version) from the very orifice of a Zombie egg. 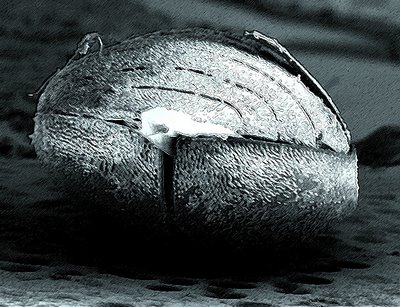 It will be remembered that various mediums, when in trance-like states, caused ectoplasm - usually some kind of fine silk - to stream forth from various bodily orifices. 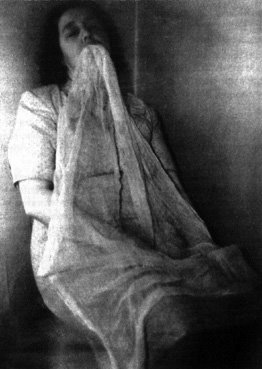 Previously thought to be slowed-down urine (cf. female ejaculation etc.) it is now believed that a silk-making gland, genetically similar to that in a silk-worm but able to produce both warp and weft, might have been produced during particularly stressful adherence to the rules of Victorian society as a short-term genetic benefit.

Ectoplasm allegedly streaming from the vagina of an Irish person. I don't think so.

Our American born-again friends will of course have other explanations.

Pyongyang, April 12(KCNA) -- The first-day performances of the 24th April Spring Friendship Art Festival (ASFAF) were given before full houses in several theatres in Pyongyang including Pyongyang Grand Theatre, the People?s Palace of Culture and Ponghwa Art Theatre on Tuesday. Art troupes comprising famous artistes including international and national concours winners of different countries, circus groups and overseas Koreans? art troupes put on stages colorful numbers of high ideological value and artistry spiced with national flavor. Korean artistes in Japan truthfully depicted their strong longings for President Kim Il Sung who formed the General Association of Korean Residents in Japan, a dignified overseas Koreans' organization of the DPRK, and showed deep loving care for the Koreans in Japan in their repertoire including female solo and Pangchang "Warm Is Love Shown by Homeland."
Female singers of a Chinese art troupe put on the stage Yangzhou serial folk song "View of area rich in water" which pleased President Kim Il Sung during his visit to China in October 1991. The audience broke into a loud applause when merited artiste and international concours winner Marina Viktorovna Andreeva, female soloist of the famous artistes group of the Moscow State Academy Philharmonic Orchestra of Russia, and British soloist Suzanna Clarke who is an international concours winner successfully presented songs.
Greek soloist Samartzis Georgios who is a national concours winner, sang Korean song "Our Happiness Blossoms Out under the Leader?s Care" with rich voice, impressing the audience.
Dancers of the REDA Egyptian Folkloric Group vividly represented the emotion of the Egyptian people in their dynamic dances such as "Dance with drums." International concours winners of the Swiss musicians group presented various numbers such as duet for flute and guitar "Today?s performance" to be highly acclaimed by the audience for their high artistry.
Foreign acrobats gave their performances at Pyongyang Circus Theatre. Watching the performances were leading officials of ministries and national institutions, members of the festival organizing committee, officials concerned, artistes and working people in the city and youth and students.
Also among the audience were diplomatic envoys of different countries and embassy officials here, foreign guests and overseas Koreans.
Floral baskets were presented to the performers, congratulating them on their successful performances. Performances go on.

Meanwhile in our sane alternative :

A Google search for "armed ectoplasm" - why not? - yields only that phrase embedded in various sites with people - BIG TIT LATINAS in fact - curiously all living in the very town in the centre of France in which I am writing this, who want to be my friends.

Anyway, you know... if you have been, thanks for looking.
Posted by BRSmith at 19:21