Existence of God Proved! Miracle of Pope's Face in Used Condom! Will DNA Analysis Throw Light on the Genetics of God? 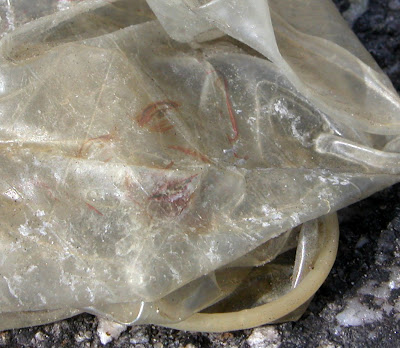 This used condom, already the subject of intense speculation and pilgrimages to the little-known town of Vierzon, in the French Région Centre, was found by a dog and brought home, abandoned in the yard and then rediscovered by Madame Y., the dog's owner.

She said (quoted in The Berry Républicain, the local newspaper which first broke the story) "I was a loyal Catholic, but do not think that God would have chosen to put the Pope's representation into such an object without reason. It may be that the Pontiff's recent statements in Africa that Capôtes Anglaises (French letters) make AIDS worse has something to do with it, because even I know that he must have been drunk or joking, perhaps the both, and that is not suitable for a man of his rank."

The condom has been frozen inside an ice-cube made from holy water in an attempt to preserve the contents for possible DNA analysis, with some believers asserting that if God put the image into the "preservatif" then the contents too must be of divine origin, though the Church has already issued a statement underlining the fact that God would certainly not use a condom if the man Ratzinger had prohibited it (AFP, April 1 2009).
Posted by BRSmith at 12:15 No comments: