Ekstra-Modern March of the Undead 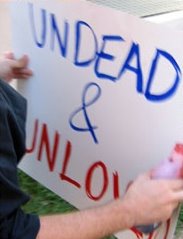 Bearing and chanting slogans such as "Zombies Was People Too", "We're Here, We're Dead, Get Used To It!" and "WHAT DO WE WANT? BRAINS! WHEN DO WE WANT THEM? BRAINS!", Zombies marched on the 22nd of September on Austin (Texas, America) city hall.

For some photos, see here.

This Extra-Modern activity ("extra" in the sense of "outside", not of "particularly") - well, let's use Polish and call it Ekstra-Modern - must not be allowed to degenerate into mere spectacle. Still less, on this appalling day when the American Congress legalised torture, and thus, for me, institutionalised the United States of America as a fascist state, should talk of Zombie rights obscure more pressing needs, to say the least.
But still.
Posted by BRSmith at 16:14 No comments: 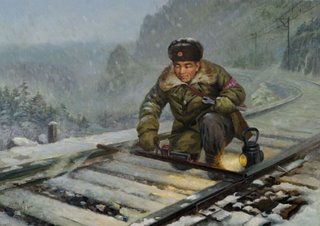 "Railway liner" - Sin Pong Nam
A bit late, but well worth the retelling:

Pyongyang, July 26 (KCNA) -- A national exhibition of art works was held at the Pyongyang International Cultural Centre. On display there were more than 300 art pieces such as Korean paintings, oil paintings, graphic paintings and calligraphies done by creators and teachers of the Mansudae Art Studio, the Central Art Studio and Pyongyang University of Fine Arts and others in the capital city and provincial capitals.
They contributed to the exhibition those pieces drawn at factories, on farms and in scenic and other places.
Korean paintings "Another Charge", "On the Field" and "At the Site of Rice Transplantation", graphic painting "At the Construction Site of the Samsu Power Station" and other works drew particular attention of visitors as they truthfully represented the ideological and moral traits of Party members and other working people and their heroic labor drive.
On display there were also art works depicting the beautiful landscape of the country including Korean painting "Sangwon Temple in Valley", oil painting "Landscape of Moran Hill" and woodcut "Lake in the Evening."
Kang Nung Su, minister of Culture, officials concerned and artists in the city looked round the exhibition on July 25.

As with Chinese painters of Mao etc., there is only one possible response for the occidental artworld to make, that is to prepare to grab these works as soon as North Korea is liberated from the choking grip of etc., etc.
The particular, peculiar, attitude we have to such artworks once exhibited in the hallowed halls of the Centre Pompidou, the Martin Gropius Bau, American Museums and so on, is a clear reproduction of what we bring to the whole country, the people, culture and so on. Patronising appropriation. Bizarrely, you can tell a lot about the whole range of our attitudes to the countries and peoples of states actually or potentially able to be "liberated" such as Iraq, Iran, and so on and on, by the way we treat them artistically, culturally.
Posted by BRSmith at 12:23 No comments: 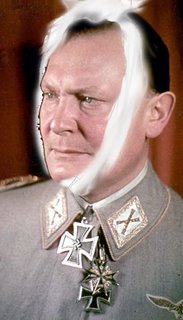 Naturally the common people don't want war; neither in Russia, nor in England, nor in America, nor in Germany. That is understood. But after all, it is the leaders of the country who determine policy, and it is always a simple matter to drag the people along, whether it is a democracy, or a fascist dictatorship, or a parliament, or a communist dictatorship. Voice or no voice, the people can always be brought to the bidding of the leaders. That is easy. All you have to do is to tell them they are being attacked, and denounce the pacifists for lack of patriotism and exposing the country to danger. It works the same in any country.

Cost of Iraq war: Minimum estimated is 6 BILLION DOLLARS per month. Judgement by those left-leaning pinko liberal surrender-monkeys the CIA: the war in Iraq has made things worse (for America, let alone the thousands of Iraquis tortured and killed). 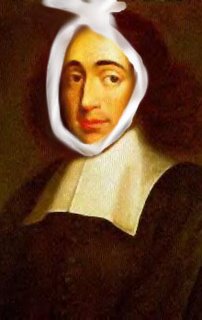 Peace is not the absence of war; it is a virtue; a state of mind; a disposition for benevolence; confidence; and justice.

Estimated number of children dying from malnutrition, unclean water etc. PER DAY: 30000, i.e. approx. 1 every 3 seconds.
Posted by BRSmith at 15:11 No comments:

Here's an actual picture of Kimilsungia. 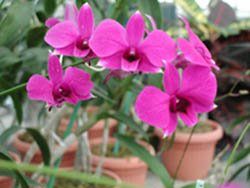 Interestingly, the North Korean website celebrating it talks of its development by florists. This must be the first occasion for such research, akin to booksellers writing books (and why not?) or TV repair-persons making programmes. A very Zombie activity.
A search for "Zombie" and "Kim Il Sung" yields 9421 hits on Google, including this page. But the word Zombie is clearly mostly used as an epithet, as a search for "Bush" and "Zombie" shows, yielding nearly 7.5 million mainly interesting pages.
My forthcoming novel shall rectify this, concatenating true Zombie material with Kim Il Sung, Kim Jong Il and indeed Kim Basinger.

Er... I thought that was the one animal one didn't have to... Oh, never mind. Here's a picture of a rabbit, 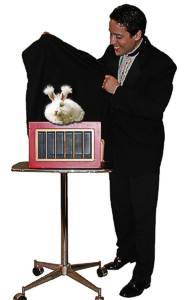 and a link to a site where you too can make a Zombie rabbit float in thin.... I'm going home.
Posted by BRSmith at 15:16 No comments:

"Let's Train, Study and Live like the Anti-Japanese Guerrillas!" - an Apology

"Three generals came to the foot of from by a crane, and they beamed so magic rays. The Japanese soldiers became blind even by looking at them or reduced to ashes, whole bodies burnt out. And the woman general had excellently shot arrows. One day, she shot an arrow at a wicked Japanese police, 100-ri away from her.
The Jap was hit in the vitals and died even not knowing where the arrow came from. More surprisingly, the Japs could not access to the scene in spite of their desperation, became blind and deaf by dint of the rays and the loud sound of reading the book of military science and eventually run away in a flurry."

I'm sorry. This blog has by no means metamorphosed into a North Korean commentary, but...
Last time, I was going to say that on each occasion that the Great Leader's Son, Heaven-sent Brilliant Commander of Mt. Baekdu and the Great Sun of the 21st century inspects a military establishment, he gives them a gun. As if they hadn't got at least one already. But I also have a sneaking suspicion that once the presentation is made, and photos taken, the gun is snatched back, to be presented elsewhere.
This morning, I was astounded to see that on visiting, yesterday, a company of KPA (Korean Peoples' Army) Unit 8211, Kim Jong Il presented them with the previously unsurpassed tribute of a pair of binoculars, a machine gun and an automatic rifle! Things are looking up. 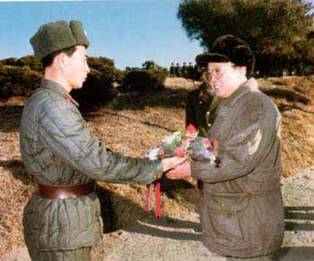 This time it's flowers. Kimilsungia? (look it up...)
And then this: almost touching, almost true, I don't know... strange...

"Pyongyang, September 12 (KCNA) -- The 9th National Exhibition of Inventions and New Technology which opened at the Three-Revolution Exhibition in the DPRK on September 6 is going on till the 15th. More than 1,500 pieces of inventions and new technologies achieved by scientists and technicians of over 50 units of ministries, national institutions and industrial establishments are exhibited there. Some of the exhibits are actual things and others are on display in the form of diagram and software."

It's that last bit. "Some of the exhibits are actual things and others..." It almost makes me - would, were I not a Zombie - want to cry. Sorry. Sorry.

Anyway, if you have been, thanks for looking.
Posted by BRSmith at 09:26 No comments:

On the spot guidance 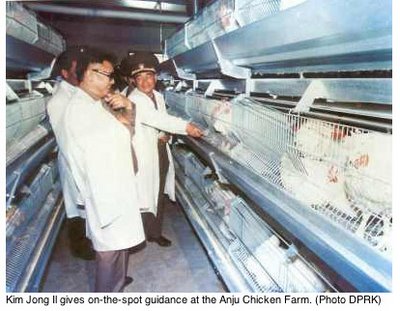 Regular readers will know that the North Korean press agency is a deeply good source of Zombie language in action, exemplified by this recent posting. "On the spot guidance" is a reassuringly common phenomenon in the Democratic Peoples' Republic, and although here given by the Great Son and Utterly Incredible Sage Kim Jong Il was of course initiated by the Glorious Everlasting Immortal (deceased) Kim Jong Il, his father. Both had and have the tendency to turn up at schools, military establishments, dam projects and false teeth factories (really) and there to give... well, on the spot guidance, being expert in all things. This then would be rather like a cybernetician or other holist whose particular insight soars above the mundane causing shock and awe in all those prepared - and who, in the North Korean circumstance, would not be prepared? - to listen.

(Compare, incidentally, in the above photo, the huge, hearty birds in the cages on the right with the glimpse of the few scrawny birds, or at least their beaks, on the left, presumably the poor, tortured reality...)