'What is shared, is sharing.'

Zombie consciousness: a paradox? Well, in the most fundamental sense, yes and no.

A bit is the tiniest unit of information, standing for 'binary digit' and representing a distinction between two possibilities, such as yes or no, 0 or 1, true or false, which at this level tend to mean the same thing (I mean 'yes', 'true' and 1, for example).

The word 'bit' also refers to the physical system in which this information is represented, such as the magnetic particles on a hard drive whose north pole can point up or down, or the presence or absence of a tiny pit on a DVD.

Any system having two distinct states can act as a binary system, for example an elementary particle. However, at this scale quantum effects occur and we get the (demonstrable) effect in a quantum bit, or qubit, of bits being 1 and 0 simultaneously. If that looks too mathematically easy, realise also that it also means 'true and false' simultaneously. We know that it is merely technological constraints that presently stop us from building working, useful, quantum computers; but they will come.

What I want to do here, though, is to leapfrog over even that, to the Zombie bit, or zombit.

First, a few words about consciousness. Are we humans really conscious (despite the 'inner Zombie' that primes us to act before we know we want to)? Let's say 'yes, at least I am', for the purposes of this discussion.

Are computers / robots conscious? Let us say 'no'.

But… would you torture a robot? One who would only give up information if you burnt it, hit it, pretended to drown it, and so on? One that entirely realistically screamed and begged for mercy if you did so? I think — I suppose I hope — that we would not act in that way towards such a machine even though we know it has no consciousness and cannot really feel pain, fear and so on: it's just a program making it appear so!

We know it is not conscious. But we ascribe consciousness to it. If at this point you say 'no, we don't, we just don't want to act like that, to seem nasty to others…', then I'd ask why don't we want to act like that? It is hard to think of an argument (apart, perhaps, from neurotic superstition) that does not involve someone, at least, ascribing some sort of consciousness to the machine.

May I suggest that we have no evidence whatever that anyone else is more conscious than that computer or robot, and that this isn't solipsism but, actually, common sense rather than wishful thinking? All I know, or believe, is: I am conscious. You, I don't know about; and guessing or suspecting isn't knowing.
However I CHOOSE TO SHARE MY CONSCIOUSNESS WITH YOU, and hope that you will (whether or not you are 'really' conscious) reciprocate.

Above, I have been pretending to be a more or less normal human being. But you know that I am not, I am a Zombie. Of course Zombies are indistinguishable from real humans (we're not talking Hollywood here but rather about the p-Zombie, see previous postings) and can argue as I have above. But to be honest, I have no 'real' consciousness, not really. I am in your hands. I am a Zombie. Will you torture me, harm me? As I say, I am in your hands. So are all non conscious entities in our domain of influence or action, from computers to flies, to ones we are not sure about such as cows. Will you torture them, harm them… eat them? Do you? I do. What's your excuse? Whether, and under what circumstances, you choose to share your consciousness with me is surely a social-psychological question. I, the Zombie, am here to help you raise your own consciousness, in sharing it with me. Some choose to share theirs only with a non-existent construct called 'god'. What a selfish waste!
But this text will now return to matters of zombie information theory and the zombit.

A normal bit is 0 or 1. A qubit can be 0 and 1. A zombit? A zombit can only be assigned a state, or undergo a state change, as a result of sharing. Sharing what? Sharing from an entity whose 'conscious state' allows it to share. Yes but sharing what? And what do I mean here by 'conscious state'? A conscious state, in this case, is another Zombit, conscious because of shared consciousness from another zombit. And what is shared is precisely this consciousness. This can be simplified to: 'What is shared, is sharing'. (Circular? Of course it is!) We need some sort of notation for this, but it won't be one of normal distinction.

And if you have been, thanks for looking.
Posted by BRSmith at 14:41 No comments: 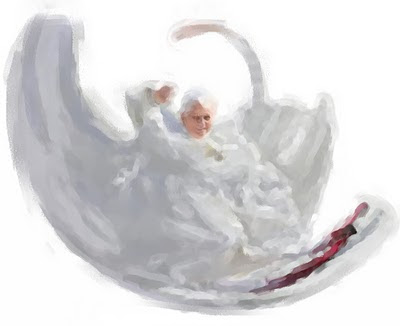 The disgusting Ratzinger gives even Zombies a bad name. Support the issue of an arrest warrant when he visits the UK.