That's the way to do it! Slight anger from North Korea

Elimination of Ri Hoe Chang Called for by Koreans in China

Pyongyang, November 24 (KCNA) -- The General Association of Koreans in China Wednesday issued a statement titled "Let's decisively eliminate Ri Hoe Chang, a heinous sycophantic traitor and anti-reunification element, in the name of nation."
The statement accused Ri, a political imposter in south Korea, of going mad with his ambition to become "president" these days, noting that he is a wicked sycophantic traitor, an anti-reunification element and a kingpin of irregularities and corruption.
The traitor at a press conference slandered pro-reform forces, ballyhooing about "a decade wasted," and not content with this, he not only blustered that "he would radically reshape the policy toward the north" but also openly revealed his sinister attempt to bar the inter-Korean relations from improving, the statement said, and continued:
This guy, who is no more than human scum, was forsaken by the times and the public and eliminated from the political arena for his despicable sycophantic and traitorous and anti-reunification acts and irregularities and corruption. His bid to take "presidential office" is, therefore, an intolerable insult to the south Korean people and an unpardonable mockery of justice and conscience.
The south Korean people from all walks of life desirous of the June 15 era should properly see through the danger of the present situation and mete out a stern judgement to such dregs of history as Ri Hoe Chang and decisively eliminate him so that he may not raise his head again. The statement accused Ri Hoe Chang, a politician whose days are numbered, of declaring his candidacy for the "presidential elections" recently though he was forsaken by the times and the nation for being dregs of history and working with bloodshot eyes to win people's favor.
Posted by BRSmith at 10:29 No comments: 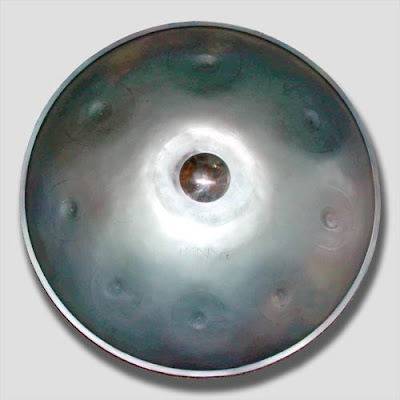 The Hang drum, from the Bernese Swiss dialect for "hand" - yes, the Swiss always sound as if they have a cold - is a wonderful instrument. Last night I was lucky enough to meet two skilled players. Looking today on the web, I found (a) that it is almost literally impossible to buy one and (b) this page on eBay where one can buy a CD of Hang music (only until November 12).
Now, on this page you can also listen to excerpts from the tracks.
All at once. Turn your sound up; get them ALL going.
This is 'Patamusic at its best.
Posted by BRSmith at 14:43 1 comment: