"Mr Blair said on the record that there was no truth in the allegation, made by the protester, that he was "paid off" by the US banking giant JP Morgan for the Iraq War." BBC, May 28 2012
Posted by BRSmith at 14:58 No comments: 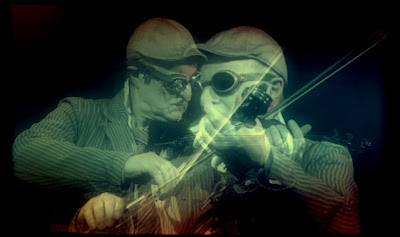 studied pataphysical
science in the home'
Yeah it’s the Beatles, John Lennon,
who never wrote a lemon,
But if you think I owe him
just wait till I start doin’ Leonard Cohen:

For the sake of the blind There is an indefensibly naff limerick that nonetheless holds a certain fascination for the well-tempered Zombie, due to its use of the phrase "for the sake of the blind", which I can't get out of my head, perhaps merely owing to its unexpectedness (you will recall that Pataphysics urges us to expect the unexpected; thus the unexpected is expected, but the expected is quite unexpected…)

Here is (a version of) the verse:

So far so ordinaire, but my researchers have discovered that a slightly politer version has been set to music by what I now know to be the celebrated Canadian composer Harry Somers.

His speciality was to deconstruct and reorganise phonemes from texts, as well as treating them in an almost 'pure' way.

I mention all this merely to whet your appetite.
Posted by BRSmith at 15:37 No comments: