What is 'Pataphysics (again)?

Since I'm introducing a series of conferences on 'Pataphysics, I thought…

For Walter Benjamin, history contains within itself a critique of 'progress', against the idea of continuity. This leads to history as a series of 'interferences' that we must construct or actualise in the present. But the idea of discontinuity, of interruption (we might say inter-rupture) is necessary only if we see through 'normal' eyes. The rainbow ends, not magically with a pot of gold, but sideways, across the bandwidth, beyond red and violet. It appears to have bounds, and in our perception, it does.

But with other eyes, those of the 'Pataphysician, we can decide to see the magenta of the spectrum, to fold (or unfold, in the this case topologically equivalent) the rainbow, then to join the red and blue 'edges' to obtain magenta, which is otherwise not to be found - see this.

The only continuity is catastrophe, and catastrophe theory shows that that the only way out of THAT is to become pluri-dimensional, like the ant on a sheet of paper that has a fold, allowing - perhaps forcing - the ant to make a dimensional 'jump', seen from its 2-dimensional point of view as a sudden, catastrophic relocation - let us say 'dislocation' - in 2-d space. 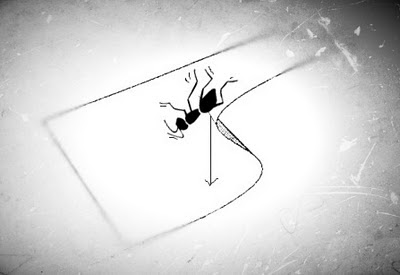 'Pataphysics PLAYS with paper-folding, with ants, with jumping and with Walter Benjamin.

And since these conferences are in an art context: what is the job of the artist? To heal the dislocations, which is reform? Or to celebrate and underline the discontinuum, which is revolutionary? Of course, both.
And 'Pataphysics is the discipline which transcends, and treats as 'normal', these apparent contradictions. Between black and white, there is always… red.
Between, beyond, and above 'true' and 'false', on a meta-level, there is 'Pataphysics.

Or just point outside, to a tree in the courtyard, and scream "That tree is fake! It's made of wood!" 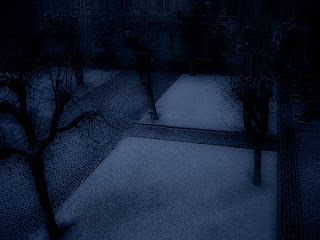 And if you have been, thanks for looking. 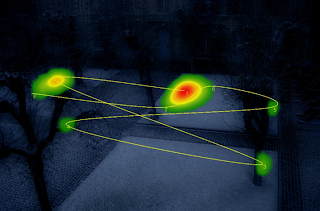 Is the pataphysics' jumping ant related at all with the jumping zucchini http://improbable.com/airchives/paperair/volume7/v7i5/zucchini.html ?

I am enjoying the discovery of Brian Reffin Smith. I am in the process of reading Baudrillard for a Masters in Fine Arts....coming to terms with pataphysics. I am interested in "the art of participation" and am assembling a essay of thoughts. I would be honoured if you (or any readers) would consider contributing a word (or several) or even an image. You can find the essay page on wordpress - the site is called throng. I won't put a link here as I think it may spam
Thank you in advance
Caroline

Caroline - I wrote to you separately...

Sam: Clearly. One way or another.