Some blasts from the past, that is to say from the archives: #1 Zombie Biscuits 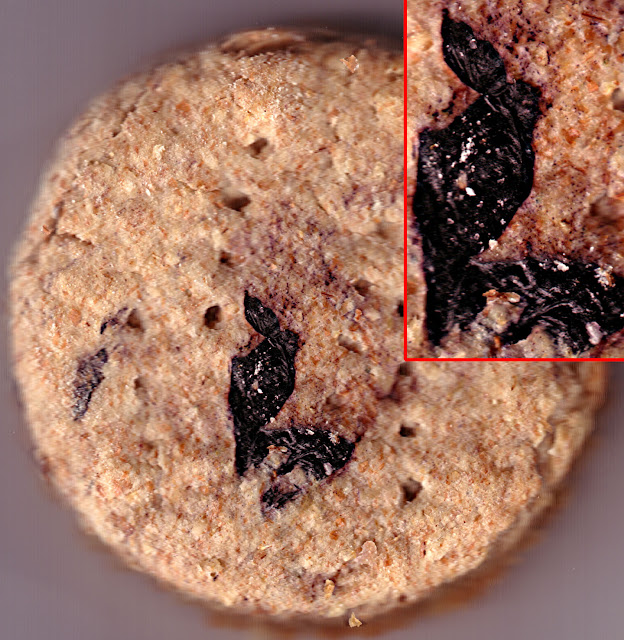 A clearly visible "Black Zombie" (inset enlarged) - note the eyes. The appropriate authorities have been notified.

Regular readers will know that I have previously celebrated examples of the stupidly gullible (usually "religious") believing that they have found or observed sacred imagery in potatoes, aubergines, American subways (the underpass and the sandwich) and so on. Doubtless there are many who would willingly put up with long queues of the frenzied and the rich outside their doors, pushing and fighting to see some holy phenomenon and perhaps to buy some small but not insignificantly priced memento.

Now, you too can participate in this gastronomic iconography, using these easily made ZOMBIE BISCUITS - a startlingly realistic image virtually GUARANTEED in every biscuit. Your friends will be amazed, the press stunned.

They also taste very good, though clearly to eat one would be tantamount to heresy under some religious regimes.

Mix all the dry ingredients and the butter together in a large bowl with the fingertips until they become crumb-like, then add the milk and mix and knead to form a dough, about 2 on a scale of 0 to 9 where 0 = totally dry and 9 = sloppy and wet; the mixture should seem a bit too dry, if you tried to roll it out now it would crack. Leave the dough covered in the bowl for 10 minutes.

Now toss 50 g fresh blueberries into the bowl and mash them into the dough. The juice that emerges will make the dough moister. Don't let the fruit totally disintegrate though.

Put the dough in a lump on a floured surface & roll it out to about 0.5 cm thickness with a floured rolling pin or bottle. Using a small glass, cut out circles of approximately 5 cm diameter and place them on a baking sheet, either special baking paper or non-stick metal: they can stick badly if not. Prick the biscuits several times each with a fork, and place in the preheated oven. Ignore, for the moment, all the dark forms in the biscuits. Just do it automatically, don't think. You want to be surprised by the emergent properties.

After 10 to 12 minutes the biscuits should be just changing colour at the edges, no more. Remove from the oven and put somewhere to cool for a few minutes.

Now you can observe the multitude of Zombies, saints, prophets, gods, sexual symbols, miniature horses and cosmic patterns that you have created. Savour each form, photograph the best, send it to the local press— the national press will take up the story later. Declare that the fruit fell in by accident, though as if it were meant to, and that you didn't notice the picture until much later.

In case there are biscuits containing (but this is unlikely) no significant religious or other imagery, the biscuits should be eaten with either Blue Stilton or Red Leicester cheese, available from any decent cheese shop. Roquefort or Cheddar make rather poor, but just about acceptable, substitutes.

To those who might aggressively argue that I am cheapening or demeaning food-based religious experiences, just shut the fuck up.

And if you have been, thanks for looking…
Posted by BRSmith at 22:56