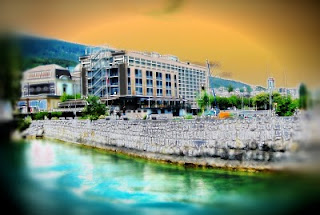 All my Swiss stereotypes have been rectified by a few days in the excellent town of Neuchâtel, in francophone Switzerland, the first time Zombie-'Pataphysics was there. I gave a talk/performance on that topic, and showed a short Zombie-'Pataphysical movie of which there is an excerpt below.
I wanted to show that with thoughtless, cheap (indeed free) ad hoc and lo-tech means, one can still make art that is, I hope, quite new.

There was the obligatory Zombification of the audience, and initial fears of people being too cool or too 'Swiss' to put on the Zombie bandages were quickly dispelled. The Swiss, at least the ones I met in the street as well as at the Neuchâtel International Fantasy Film Festival and its colloquium 'Imaging the Future', were some of the most cultured, open and delightful people I've encountered. 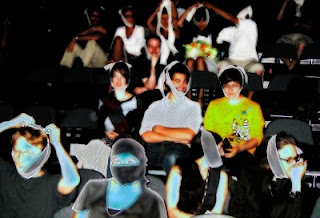 In this treated clip from 'Casablanca', details in the movie have been approximated to by ellipses, using medical imaging software designed to show particles. The sound was stripped away, each frame of the film was 'thresholded', that is forced to be just black and white (no greys) then the particle analysis software was applied, the ellipses found by approximating major and minor axes on each 'particle', and the frames combined back into a movie. Finally the sound was restored.