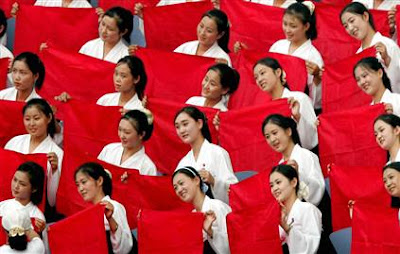 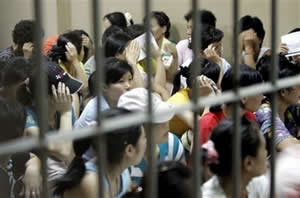 One can do no better, surely, as a man today than leave this space to the voices (literally) of women -- in this case those of North Korea, you knew it would be that -- and this edifying communiqué from the (north) Korean Central News Agency, entitled SONGS OF WOMEN:

Pyongyang, March 7 (KCNA) -- The people love to sing songs carrying the pride and self-confidence of the women on the general advance towards the high eminence of a great, prosperous and powerful socialist nation.
The song "Love your wife" calling for respecting the women socially is popular among the people.
There are many songs showing the spiritual world of girl-soldiers in the "Persimmon tree company "," Wild flower Company" and other military units. Among them are the songs "Song of coast artillery-women" and "I am a girl-soldier in Songun era".
Reflected in the songs "I am a wife of sentry" and "I am an officer's wife" are the noble ideological sentiment and revolutionary optimism of servicemen's wives who are doing their best for their husbands defending the country devotedly.
The songs "A girl riding a swift horse", "Girls in our factory" and "A girl silk-weaver in Nyongbyon" sing of the fruitful working life of the women who are distinguishing themselves in the economic construction along with men. And the songs "Women are flowers" and "Song of wife" reflect the women's pride of creating the happiness of the families as dear wives and good mothers. The songs touch the heart-strings of the people.
Today the Korean women love to sing these songs created in the Songun era and are doing their bit in the efforts for building the great, prosperous and powerful socialist country.