A strange day today, in that I watched a DVD of a voyage to North Africa undertaken by a colleague and friend who died a few years ago and a group of art students. The trip was called "Atelier Nomad" - the nomad studio. And of all the things that I thought would move me, make me cry or laugh, it was a picture of him, on a camel - a real one, not the 4x4s that the Bedouin call "Japanese Camels". He and the students were wrapped from head to toe in white cloth; they all looked like Zombies. Another image I have is a photo of him wearing a Zombie bandage. He wasn't a Zombie, he was just experimenting with the possibility.
At lunchtime, I visited a sort of local government canteen with another colleague, who perhaps approaches the condition of the undead. We ate, as you can see.

I just had time to make this quick sketch 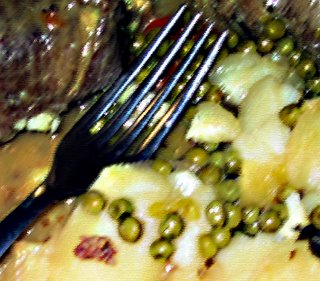 before the sauce surrounding the delicious peas, potatoes and meat - produce of more than one country - solidified. My companion became so engrossed in a morsel of his dessert that he was oblivious to the changes overcoming him. He was also railing
against certain aspects of our pedagogical approach. Then, towards the last bite, he described a different plan vis-Ì-vis (I'm sure the a and its acute accent won't have appeared correctly) (right, it didn't) the first year art students. I don't know if it was his plan or someone else's; he described it as Stalinist, and I wasn't sure, he was so worked up, if this was a criticism or a commendation.
In fact, I never had time to find out. He seemed to shimmer in the close, tight air of the canteen; his face was flushed yet paradoxically pale, almost post-orgasmic. He put the last piece of xxxxx xxxx between his rigid fingers and as it made its way towards his mouth, I knew beyond a doubt that he was a Zombie too. 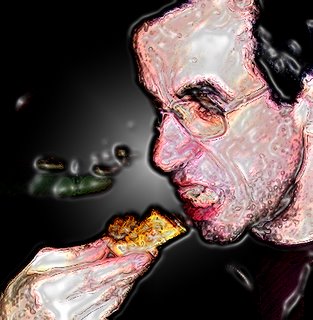 I thought "Shit, I don't want other Zombies all around me..." Then I thought, "No, that's selfish..." and I smiled at him, one of the first times I have done so in the 10 or so years we have known each other.

The thing is, I'm sure I wouldn't have been so... you know, trying to be nice, to be good... if I hadn't seen the photo of my friend Jean Castel on that camel. We went looking for gold once, and found a little.

If you have been, thanks for looking.
Posted by BRSmith at 17:33