Vierzon, the Athens of the North, Sky-Fairies and so on...

In the middle of France (not the Midi, which is in the south) there is an awful town called Vierzon. (It looks ok in the pictures on this linked website but trust me, it's not.) Famous only for figuring very briefly in a Jacques Brel song Vesoul ("You wanted to see Vierzon, we saw Vierzon...") and equally briefly in the excellent Alain-Fournier novel Le Grand Meaulnes ( The Wanderer), one can easily get stranded there due to train strikes or simply to bad luck. It is then debatable whether the fact that the station buffet has closed is a good thing or bad. I tend to the former view, it really was disgusting.
Anyway, I consulted a web site that listed various X's of the Y - Athens of the North, Venice of the East and so on. And unprompted, the phrase "Vierzon, the Athens of the North" came into my head and wouldn't go away. Here, too, one can learn that Beaver, Oklahoma, USA, is the "cow chip" (they mean cow shit) throwing capital of the world. Typical - they'll throw it but not name it.
Athens was surely not very big in the time of the great Greek philosophers; the population in 500 BC was, er... about 315 000 (of which only 172 000 were citizens). Ok, so it was quite big then. But given the stacks of philosophers roaming the streets and going down to the pub ("Old Plato been in yet?") One would think that in Vierzon, current population 30 000, (of whom we do not know how many are citizens) there would at least be a handful of thinkers. But no.
Though there are things there to give pause for thought. I once saw an advertisement in a pharmacy for a system of slimming and well-being cures called Kotz, which is German for vomit. The French will believe anything - they are more credulous even than the Americans! They believe in homeopathy in their millions ("My friend's tortoise got better so it can't be placebo effect can it...") They also believe that they invented most items of technology and gastronomy. Well, at least they don't believe that their President is worthy of respect just in virtue of being President, as many Americans seem to.
Which takes us neatly on to the hoo-haa about the Danish newspaper Jyllands-Posten's dread cartoons. (Not to mention the false ones circulated just to fan the flames. "One of the pictures, a photocopied photograph of a man with a pig's ears and snout, has been identified as an old Associated Press picture from a French pig-squealing contest." says the BBC.) Note: Vierzon is the pig-squealing capital of the world. The trick is to vibrate two fingers against the inside of the cheek, whilst screaming inwards. Honestly.
I just wonder what it is about fundamentalist Muslims, Christians and Jews that causes them to scream and yell and pull their own hair and tear their clothes when confronted with what they consider to be blasphemy etc.? 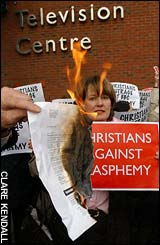 Can we just, please, remember one thing? All their outrage, and all the western politicians' cynical and opportunistic apologies and so on, are about SKY-FAIRIES. It's as if the believers in spirits in watering-cans were at ideological (and beyond) war with those who insisted on green pixies being the one true religion. And we join in and take sides as if it were about something real, instead of deluded peoples' desires not to die, or to go on to some afterlife if they do. We contemplate the possibility of escalating conflict between our "Judeo-Christian values" and those of the Muslims. But it's all bananas! It would be cosmically hilarious if the effects weren't so serious. (Yes, yes, I know, it isn't really about religion at all. Homework: what is it about then? Use of the word "values" will be penalised. Hint: was and is the Northern Ireland mess about religion?)
Zombies, you will note, are to be found on both sides, just statistically. They relish nothing, but are just there. Better, however be friends with a Zombie (please?) than those behind some of the sites I looked at to see the cartoons - mostly right-wing or beyond.
You have to be very principled and careful here, I think, or you end up seeming to be, or appearing to lend support to, people you would normally cross the street to avoid.
But essentially let's first chant together: "We will not accept their axioms!"
And then?
If you have been, thanks for looking.
ps: I didn't mean it... please don't kill me. Vierzon's a lovely place really.
Posted by BRSmith at 20:24