The day dawns bright, and cliche clear. You're lying on the bed in that orange dressing gown, watching vapour trails of jets flying west: Russia or Poland to Germany, France and Britain.
There are several, crossing each other, or so it appears from your perspective. You try to force them into shapes or symbols (as a kid you did it with clouds: God's bicycle, Jesus' sponge) but far from this, and you, they are merely the continuations, the dotted lines it seems, already broken in the upper streams, of solid, satisfactory forms whose home is quite elsewhere. This reminds you of.....? Other.
You think that planes are freedom, expanding out? Actually they are the reverse of that, homing in on a narrow strip of land 4 Km long. All that possibility ending up in, I don't know, Frankfurt airport or somewhere. 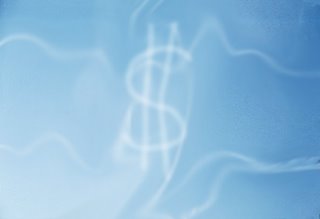 The sky full of people who haven't paid for their tickets. More than half the plane, they say. Plus a few paying to be in, or travel to, the anywhen. The rich can live in the past, present or future: old fashioned trips to Buenos Aries, St. Petersburg, cyberspace and always new ideas. The poor are forced to live in the present. That's all.

State your preferences, say your souls.

Lovers, other; location, other; alive/dead (tick), other.
Posted by BRSmith at 21:05