Frog on the Verge of Leaping - soft and fresh feelings

All the peoples of the world praising Kim Il Sung 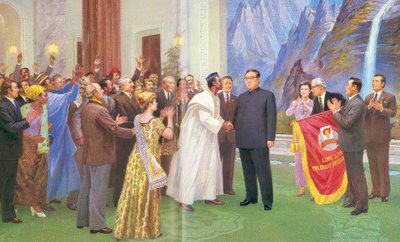 The Zombie News Agency is proud to re-present here a couple of dispatches from the estimable KCNA North Korean news agency site.

Pyongyang, February 24 (KCNA) -- An exhibition of porcelain belonging to the Ri Dynasty (1392-1910) is going on at the Korean Central History Museum. The Korean people made fine ceramic works including white porcelain during the Ri Dynasty by carrying forward the tradition of Koryo ceramic workmanship well known to the world. Displayed at the exhibition which opened on Feb.14 are more than 70 pieces of kitchen utensils and the sorts of stationery with the value of artistic handicrafts. The exhibits have varied decorations including relief, intaglio and pattern on white ground, which is suitable to the national aesthetic sense of the Korean people. Conspicuous among them are the green-white porcelain plate reflecting 10 creatures including pine tree, Ganoderma, deer, crane and the cloud which symbolize longevity, the white porcelain dish decorated with plum blossom in relief, the crimson-white porcelain writing brush vessel reflecting beautiful Mt. Kumgang and the red soil-white porcelain container for ink-stone water made in the shape of frog on the verge of leaping. All the exhibits are worthy of decoration as they give soft and fresh feelings to people. The porcelain works, combined with artistic skill and utility, make people feel plentiful and stable. The exhibition showing the developed ceramic workmanship of the nation is visited by Koreans and foreigners every day.

Pyongyang, February 24 (KCNA) -- Seminars on leader Kim Jong Il's famous works "On the Juche Idea" and "Socialism Is a Science" were held by organizations for studying the Juche idea in Russia, India and Uganda on Feb. 11 and 13 on the occasion of the February holiday. Dmitri Kostenko, chairman of the Russian Youth Association for the Study of the Juche Idea, said that the work "On the Juche Idea" serves as a precious textbook on revolution for the adherents to the Juche idea. Anita Chopra, president of the Indian Working Women's Society for the Study of the Juche Philosophy, noted that Kim Jong Il in his work "Socialism Is a Science" compressively proved the justice, advantages and invincibility of the socialist cause based on the Juche idea and clearly indicated the way of winning the victory of socialism. Recalling that the DPRK won one victory after another in the stand-off with the U.S. even under the situation where the attack of the imperialist reactionary forces was focused on it at the end of the last century, she noted that this experience clearly proved the justice and truth of the Juche idea. The chief of the Group for the Study of the Juche Idea of Comrade Kim Il Sung of Old Kampala Higher Middle School in Uganda stressed that socialism is sure to triumph for its scientific accuracy and truth.

It is by studying the "exceptions" to our more "normal" discourse that we can also learn about our own systems of representations, I believe. Art is never, ever "normal" (naturally, we must ask "normal for whom, in what context". It can change.) I would go so far as to say that that which is normative, is not art - or rather, certainly not good art. This definition goes far beyond propaganda of course. However there is, genuinely, much of interest in the Collected Woks (sic) of the Great and Invincible Shining Supreme Eternal Leader (deceased) Kim Il Sung, though clearly not necessarily in the way he intended.

Turning to the additions to the list of Millennium Products the (British) prime minister (The Right Honourable Anthony Charles Lynton Blair, M.P.) described them as "the very best of British innovation, creativity and design".
He told the companies that produced the chosen items: "Congratulations to all of you on your imagination, your ingenuity and inspiration.
"Our future success depends on the qualities you, your product and your company embody."

Other inclusions in the final batch of products are: