More on Zombie, then 'Pataphysics

The p-Zombie is a philosophical construct mainly attributed to David Chalmers, and used by times in debates about consciousness studies, to which your blogger has occasionally contributed. Briefly, the argument I think goes like this:
Imagine an entity indistinguishably different from a human being. It looks like one, walks and talks like one, reacts like one - there is no way of telling it's not a human. But it's not, it's a Zombie, without "qualia" or real human consciousness. The argument, to simplify, says that if you can imagine such a being, then you accept that the essence of human consciousness, perhaps the mind or "soul", is NOT a product of the biological machine, but something else.
The argument is supposed to undermine those of us (but then I would say that, being a Zombie) who would argue that there is no mystery, no "soul"-like thing, no mind-body split. Or rather, that the way in which consciousness, awareness, mind, emerges from the biological, chemical being, is already enough of a mystery, and very beautiful.
Really, in keeping with certain critics of this argument ("It's so bad, it's not even wrong...") what I should really do is to assert that:

For I would argue that in a useful way (useful for art, artificial intelligence, relationships and so on) it's possible to assert that we are all Zombies, just, you know... pretending. Bear in mind that such Zombies are quite capable of reflecting on their Zombie/Human status.
Then let us pretend well, as if we really meant it.

'Pataphysics is the science of imaginary solutions, and is to metaphysics what metaphysics is to physics. The Paris-based College de 'Pataphysique, in which I have the honour to hold the Chair of Catachemistry and Computational Metallurgy, is more or less like Freemasons on LSD, though with far, far more bureaucracy, consisting in an all-embracing, devious network of sub-committees, and quite a lot of wining and dining. It is, however, a deeply serious institution, and numbers or has numbered many illustrious avantgardists, scientists, philosophers and writers amongst its members, from Marcel Duchamp, Raymond Queneau, Boris Vian, Max Ernst, Eugene Ionesco and Georges Perec to the Marx Brothers, Dario Fo, Fernando Arrabal, Umberto Eco and Jean Baudrillard. It is also the umbrella organisation not only of OuLiPo, the Potential Literature Workshop, but also of OuPeinPo for art, and various other "OuXPo" in the realms of comic strips, music, cuisine, crime fiction and so on.
OuPeinPo, of which I am a member, exists to offer ways of using constraints in art to other artists and the general public. We don't, as a group, make art per se, but rather illustrate the methods, constraints and systems we discover, invent or celebrate.
The question then arises, where can you find or how can you make neutral, value-free images etc., to be the raw material for these processes? The answer is to assert, as we do, that all the images we use were originally the result of Zombie endeavour, and hence have no real qualities inherent in them. You can read into them what you yourself like, but that's just your choice - the actual work had none. 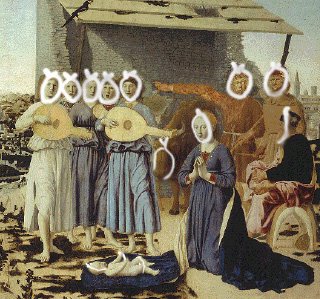 It is possible to assert that all art, of any kind, in any field, is Zombie. 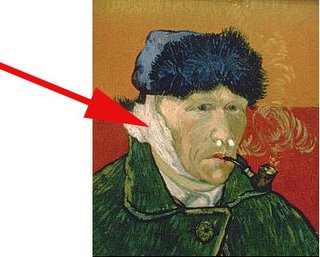 More later. And, if you have been, thanks for looking.
Posted by BRSmith at 15:42