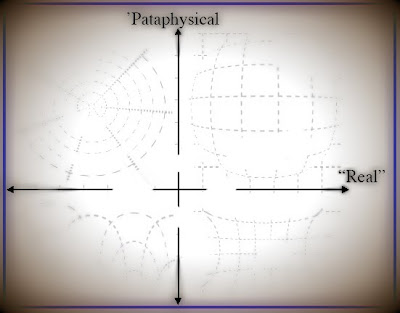 The British literary journal the TLS, or Times Literary Supplement, has recently been asking this question, in a debate to which I have contributed. (The TLS and New Scientist would be the two journals that no-one with any claim to culture, and enough money to buy or subscribe, could possibly be without.)

Since 'Pataphysics is both easy and impossible to define, that being the nature of the subject, I came up with a description which, I think, is both excellent and true.

The graph above shows what I mean. It will be seen that if one follows the "negative" "real" axis to the left, one reaches the "unreal" - this is not the same as the imaginary or 'Pataphysical of course. The unreal relates directly to the real; Derrida would, I think, have said that the unreal necessarily comes along with the real and vice-versa, in a text or in art and probably anywhere. A question remains - what is the "negative" aspect of the 'Pataphysical axis? Well, of course it's still 'Pataphysical! That's another definition of 'Pataphysics, for free.

i, or the 'Pataphysical, is an imaginary component that can be combined with the "real" to give a complex (with both real and imaginary dimensions) that can enable operations or experiments, concepts etc., which would be impossible without it.

An ashtray is an ashtray, but a 'Pataphysical ashtray needs another dimension, other than the "real", to make sense of it. It thus calls the ashtray into question.

Of course, our perception of this space is rather different from the logical or mathematical representation, and might best be depicted by an image such as the following - or indeed any other…
The burnt edges signify that this is just a fragment of a larger whole. 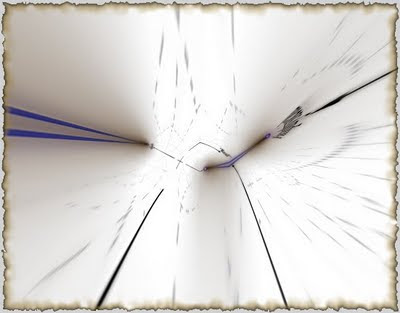 An excellent and very fresh take on a topic that has been examined ad eternam. I like your example of a 'pataphysical ashtray. Crystal clear demonstration of the imaginary (or 'ethernal') aspect.
To appear complete though I'd dare to write 'pataphysics next to the arrow at the bottom, too; and the scale then would go from the absence of the apostroph at level zero, the most absolute freezing unconscious pataphysics, to more and more apostroph in any direction - hence the equality of the opposites. The zero level might appear as the starting point of your zombification, stretching out as a result of interaction in any direction to apostrophize all things real and unreal. But of course it's a matter of opinion.

Yes indeed - the equality of the opposites condenses it down further in a way, hence even more likely to be true. Thank you. A 'Pataphysical reading of George Spencer-Brown's "Laws of Form" might come in handy here…
http://en.wikipedia.org/wiki/G._Spencer-Brown

Synchronic City Dept.
I've started reading The Laws of Form last week! I cannot remember how I got hooked up to Spencer-Brown, I think through Terence McKenna and John Lily, and reading bits from his apparition in Esalen made me visualize a congregation of geniuses mesmerized by a very strange person. I've been recommended his poetry as well, said to be quite offbeat (meant in the best possible way).
In short, yes. I'm having a pataphysical reading, and even a 'pataphysical reading of Spencer-Brown's Laws of Form right now.