Clearly, we travel along life's blah blah journey as if it were nice and orderly; clearly it's not. Most art is made as if it were, though, even film. Erudite readers will know that the College de 'Pataphysique, founded upon certain ideas and principles emanating from the estimable Alfred Jarry, interested as it is with the science of exceptions, and housing all the OuXPos, such as OuLiPo and OuPeinPo - the potential literature workshop and ditto painting, but also other bodies where the X can be comic strips, cooking, police thrillers, music, history and so on - would most certainly NOT take things in a given order.
How then to explore the world, through art and science and philosophy, as if sequence and causality were not of the essence?
In literature, usually, a book is a book, and short of attacking it with a razor blade (pace William Burroughs) there is little we can do. However, there exist books to be read in no particular order. B S Johnson's "The Unfortunates" is a well-known example, a series of unbound chapters in a box, famously hard to find in its first edition. 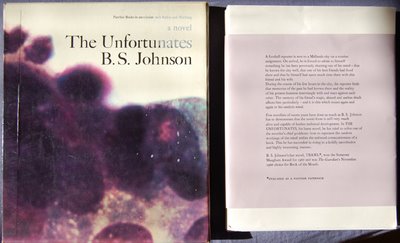 There is also a most excellent website dealing with this form of spinelessness, and the purpose of this blog entry is to direct you to it.

As a thought experiment, or more: how would it be to destroy sequentiality in all sorts of other areas - of course this has been done if we look hard enough - such as music, cooking recipes, automobile construction, sex, and so on, and so on?

And if you have been: thanks for looking.
Posted by BRSmith at 09:01