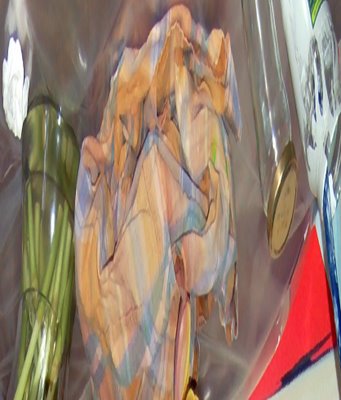 As one does, I was idly taking photographs of real flowers in a vase in front of a painting including flowers in a vase (and much else, obviously) - and then distorting the resulting photographic images in Photoshop and other software in order to perform various topological operations when suddenly I noticed that an old, short-sleeved, orange tartan shirt that I use for cleaning the oil paint from brushes... had assumed the unmistakable features of the "president" of the USA. Quite why the war-criminal Bush should thus manifest himself I don't know, but who am I to question what is clearly a most un-Zombie concretisation of pure Will.

Crowds of the faithful need not rush here, nor collectors of such epi-phenomena as the face of Nicole K (peace be upon her) quite clearly etched into a slice of aubergine, for I have burned the shirt, which ignited with a satisfying WOOOOMPH due to its being rather soaked in turpentine.

Pyongyang, February 14 (KCNA) -- An enlarged version of "Short Biography of Great Leader Comrade Kim Jong Il" edited by the History Institute of the Central Committee of the Workers' Party of Korea was published by the Workers' Party of Korea Publishing House.
It has 8 chapters comprehensively dealing with the brief history of Kim Jong Il in chronological order.
The first chapter of the book deals with his revolutionary history in the period from Feb. Juche 31(1942) to Aug. Juche 49(1960). In that period he formed the "Group for the Study of the Short Biography of General Kim Il Sung" and started the study tour of the revolutionary battle sites in the area of Mt. Paektu.
Its second chapter deals with his revolutionary activities in the period from Aug. Juche 49 (1960) to Mar. Juche 53(1964)). In that period Kim Jong Il visited Guard Seoul Ryu Kyong Su Tank Division 105 of the Korean People's Army, starting his Songun revolutionary leadership. He entered Kim Il Sung University where he developed in depth the immortal Juche idea, Songun idea.
The third chapter of the book tells about how wisely he guided the party work and the drive to celebrate the sixtieth birthday of President Kim Il Sung as the greatest national holiday, etc. in the period from Apr. Juche 53(1964) to Feb. Juche 63(1974)).
Its fourth chapter deals with his revolutionary activities in the period from Feb. Juche 63(1974) to Sept. Juche 69(1980).
After being chosen as successor to Kim Il Sung and an outstanding leader of the WPK and people, he formulated the President's revolutionary idea as an integral whole of the idea, theory and method of Juche and declared it as the supreme programme of the WPK to model the whole society on the Juche idea.
The fifth chapter of the book tells about his revolutionary activities in the period from Oct. Juche 69(1980) to Dec. Juche 78(1989). This part of the book explains how he led the work to greet the sixth Congress of the WPK as a grand festival of victors and how he made sure that the Koreans and the world revolutionary people grandly celebrated the 70th birthday of the President.
It also tells that he authored many works and led the work to strengthen the KPA and the people's power and wage a dynamic movement to create "the speed in the 80s," thus bringing about a fresh surge in socialist economic construction.
The sixth chapter of the book is devoted to his revolutionary activities in the period from Jan. Juche 79 (1990) to Jul. Juche 83 (1994).
It tells that he held the important post of Supreme Commander of the KPA and was elected chairman of the DPRK National Defence Commission and wisely led the work to demonstrate the advantages and might of Korean-style socialism and revive the socialist movement.
The seventh chapter of the book dealing with his revolutionary activities in the period from Jul. Juche 83 (1994) to Dec. Juche 87 (1998) tells that after the demise of the President he put up such slogans representing his faith as "The great leader Comrade Kim Il Sung will always be with us" and "Let us arm ourselves more firmly with the revolutionary ideas of the great leader Comrade Kim Il Sung!" and led the work to build up the Kumsusan Memorial Palace as the supreme temple of Juche.
It also says that he was elected general secretary of the WPK and chairman of the NDC of the DPRK.
The eighth chapter of the book deals with his revolutionary activities in the period from Jan. Juche 88 (1999) to Oct. Juche 94 (2005). It tells that he, true to the noble intention of the President, unrolled the policy of effecting a turn in building a great prosperous powerful socialist nation, the policies of attaching importance to the ideology, the arms and science and technology and laid down other important guidelines for building a rich and powerful country.
It also deals with the facts that he arranged the historic Pyongyang meeting which culminated in the adoption of the June 15 North-South Joint Declaration, conducted energetic external activities, demonstrating the prestige and dignity of the DPRK worldwide and injecting fresh vigor into the efforts to accomplish the cause of global independence and wisely led the people to celebrate the 60th anniversary of the WPK and the 60th anniversary of the country's liberation as grand festivals of victors of the Songun revolution.
Posted by BRSmith at 18:12