Dumb (and: America - love it or leave it) 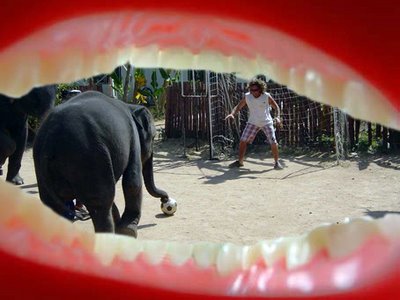 Strange to be writing when you can't speak. I had teeth done this lunchtime, and still can't feel my lips or tongue, can't eat, drink, and especially can't speak. Quite dumb. Also, I feel a need to move my lips as I read or write, to confirm that the system works a bit. I hear "President" Bush moves his lips whilst reading. The Romans apparently did too, it was the norm.
The excellent all-female dental team were muttering to themselves about numbers, and through the haze of slight pain and much terror, I realised they were talking about football non-stop. This was in Berlin, of course.
I prefer "real" football, with lots of goals. None of this 1 - 0 stuff! I want to see Germany playing the Isle of Wight second team. 27 - 0, 6 own goals, piles of soiled underpants for goalposts and the referee hangs herself after the match.
A team of Zombies would be oddly ineffectual, since Zombies can't cheat, they only appear to be able to. 'Pataphysics, though, tells us that this is perfectly ok: the science of imaginary solutions can be brought to bear on football as well as all else. A Google search for 'Pataphysics and football reveals 1440 hits, but I can't be bothered to look.
'Pataphysics deals with singular exceptions, not general rules and induction or deduction, so there is a team of animals playing soccer inside my mouth at this very moment, proving that Donald Rumpsfeld really is a psychopath.

ps - A word to the right-wing whingers leaving their disgusting posts justifying anything Bush, Rumpsfeld et al and their killers and torturers do, all over news and other websites such as the BBC: if you don't like the traditional values shared by America and Britain of fair play, decency, humanity... why don't you just... you know, LEAVE? I'm sure you'd be happier in a place like Uzbekistan.

pps - A deeply wonderful blog whose latest post concerns the use of landmines in the art gallery, and much else of erudite stimulation : http://museumofdust.blogspot.com/
Posted by BRSmith at 15:50