Best Things on the Web: Dumbshit monkey-whore bigots like you should die 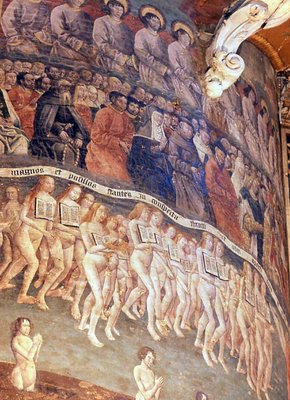 What texts are these women, on their way to hell, presenting?
This image comes from the excellent cathedral in Albi, France.
The subject of today's posting can be found below, but please don't look yet...

A long time ago, I found some hallucinatory email exchanges on the site to which I'll refer you later, lovingly presented on the web. Two women (one assumes) are arguing about God, the Devil and so on. One is part-black, "religious" and apparently "ignorant", the other is white, a "devil's disciple" and apparently "cultured". But guess which of them wrote this: " You dumbshit. Morons like you should be publically (sic) executed. Do you have any idea how much credibility you lose when you (sic) "typing" in "typeing error" is misspelled. You can't even write compelte (sic) sentences. You have terrible grammar, pathetic congnative (sic) capabilities and your messages still reek of your rotting dad's dick."

Normally, this would be of zero interest for anyone of the Zombie persuasion. But what is fascinating about the exchanges - and I think you have to read them more than once - is that all is not black and white.

You want to see post-modern relativism - and who doesn't - in hilarious action? Look no further. There is a truth out there, Jim, but still, better put our phasers on "stun".

Zombies - please think about, and ultimately trust me on this - are necessarily far beyond considerations of collecting truth and using it for some purpose. They are "mere" observers, who, having an absence of qualia, possess no a priori value-models of the world (of course they pretend and are unconscious, as we are, of their pretence. No, no, no, you can't distinguish them like that ...) Zombies perceive all the sides of everything, they do not filter. This would drive a non-Zombie mad. But to ask if a Zombie, one of the stinking, living dead, is crazy, is to make a category error.

Their tragedy, if they have one, is that this all-seeing (and hence non-comprehending, in the very fallible human sense) would make them perfect lovers, perfect political activists, perfect innocents... Jesus-like, they could be expected to change the world. Yet what separates them from god-like status - and I do know this, for as you know by now, I am one - what arrests their divine development, what retards the rictus smile of omnipotent satisfaction that is not even to be criticised on egotistical grounds - the so-compassionate circumflex that successful rivals in love have, those fucking creeps - what stops their bid for big-bangness is (and this would be funny if not tragic) a lack of will to act!

Potentially able to do anything, they are like unbooted computers, and can do nothing. Their omnipotence is only virtual. Their art is potential, their politics a simulation of feeling. Their "love" is, ultimately, appalling.

Please read the mails on the following link, with this in mind.

And if you have been, thanks for looking.
Posted by BRSmith at 12:05